Summary: when inputing text on an iPad or iPhone do a double space to finish a sentence. It will transform into a full stop followed by a space. 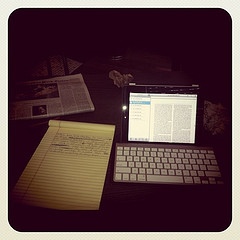 I’ve had an interest in all things ‘productivity’ related for some time, but over the last few years its become a stronger driving force. When I took on my current full-time position implementing and troubleshooting ACT! In 2008, I became far more aware of why a number of businesses I’d worked with previously had not been as profitable as they could have been. They didn’t have an efficient system to deal with the management of staff calendars, meetings, todo’s and opportunities.

Now that I work with and consult with clients on automating some of their processes (using their CRM product as a platform), I see a need for two types of ‘productivity’ help, one that focuses on personal workflow improvement on an individual level and one that focuses on the businesses workflow at a business level.

There is crossover between the two as often a small personal improvement results in an improvement for the business as well. For example, the small, simple tip of doing a ‘double space’ at the end of a sentence when typing on an iPad/iPhone has greatly sped up the rate at which I can input text I to said device. That ‘double space’ transforms into a full stop followed by a space. That’s a personal improvement. But the business benefits because I’m inputting longer, more meaningful notes when I’m out and about. That’s a business benefit.

As a side note, when I was taught to type, we used to do a full stop followed by two spaces. This idea of just one space after a full stop felt foreign. Then I read this article on Why you should never, ever use two spaces after a period and now I’ve seen the light. I was wrong. Damn those monospaced fonts! Now I use a single space after full stops, which makes this ‘double space’ trick particularly useful and as a bonus, it now feels ‘right’ to do so.

I’ve realised that I know lots of these little titbits for improving productivity, and that rather than just sharing that verbally with others when I see that they could benefit from such, I should post it here so that others can benefit. Hence the title of this post, which signals a new resolve to share my knowledge.

Hope you find this and the tips to follow to be helpful.